Every year, millions of people flock to the Yucatan peninsula to visit the sacred town of Chichen Itza. Nearly 1,000 years old and deemed a UNESCO World Heritage site, these breathtaking Mayan ruins are in surprisingly good shape and are as mysterious as they are ancient. Here are a few of the most interesting facts many are unaware of:

1. Chichen Itza may be an ANCIENT site, dating back over a thousand years, but it’s actually one of the 7 NEW Wonders of the World…

That’s because the lists were established at different times throughout history and Chichen Itza is not on the list of original seven. The 7 wonders of the ancient world include such landmarks as the Lighthouse of Alexandria, Colossus of Rhodes and the Great Pyramid of Giza, which is the only one still standing. The original 7 were named in 225 BCE by Philo of Byzantium, which was long before Chichen Itza was even constructed. In 2007, after a massive worldwide vote, the finalists were anounced and Chichen Itza was named as one of the elite 7 New Wonders of the World in the company of great marvels such as the Colosseum, the Great Wall of China and Petra.

2. The Mayans never really disappeared…they are still there!

There is a common misconception that at some point in history, the Mayans vanished into thin air and all traces of them were gone for good. Well, as much as that version of events makes for a great historical mystery, it isn’t quite the case. Not only did the Mayans not completely disappear, they are still around! In the Yucatan, if you were to visit Chichen Itza, you would have to drive through a village full of modern-day Mayans who speak the language and rely heavily on the revenue generated from tourism. They can be spotted selling a wide variety of different types of goods and souvenirs, many of which are handmade and quite beautiful. 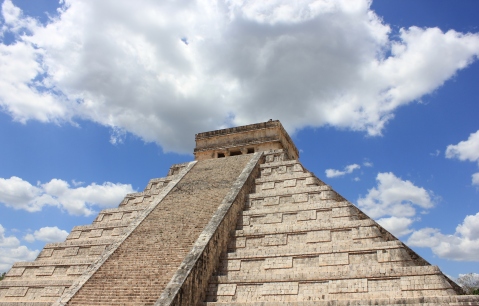 3. The public was once permitted to climb all 91 steps of El Castillo, until 2006 when it was banned.

Prior to this point, visitors were allowed to climb the temple and the experience was much different than it is now. Due to the steepness of the stairs, the climb up and especially down, was considered pretty risky. During those times, they had emergency personnel at the bottom of the temple and a guide rope for people to grip onto on the way up or down for extra support. However, in January of 2006 an 80-year-old traveler fell and died while descending the pyramid and soon after that, tourists were no longer permitted to climb the steps.

4. Human sacrifice was so common, its all over the walls…

In the arena where the games took place, its almost overwhelming to think that someone could even throw a rubber ball high enough to get it in the hoop at just the right sideways angle to score. However, when your life is on the line, the Mayans may have gotten quite competitive. On the walls of the arena, depictions of the winning team captain decapitating the losing one may be seen, as well as jaguars eating human hearts throughout other areas of the site, proving sacrifice was considered quite normal, if not necessary to maintain a decent relationship with the gods. The bones of not only adults, but also children, have been found at the site.

5. During the fall and spring equinoxes, people come from all over to see the giant snake of light…

The temple of El Castillo was built as a tribute to Kukulkan and during the spring and fall equinoxes, many people travel from near and far to witness the shadow-effect from the sun that forms a snake, slithering down the edge of the temple that ends at the head of the feathered serpent. The effect is quite amazing to see, and despite the huge crowds, is definitely worth checking out.